A case (archive) was filed against me by Kingofaces43 stating that I had violated 1RR and was a pest. Trypto chimed in saying, "I sure didn't follow him anywhere".

The following was added to the case, to show just how false that statement was. In the end Trypto & I were given a mutual IBAN said to be "no fault" and associated with an associated ABAN (effectively making it a topic ban from anything Trypto has ever edited in mainspace). Trypto then appealed and with the intervention of some power-users (including NY Brad) was able to overturn his part of the no-fault ban despite the evidence provided.

His first "post Sashi ban" action? Remove the Le Monde article talking about Monsanto's role in the Séralini Affair. He didn't just massage the text around it, he cut it out entirely. Wonder why he's so concerned about covering up Monsanto's actions...

SWAPP = Strategic Wikisuit Against Public Participation. On 16 May 2019 Tryptofish said: "I sure didn't follow him anywhere." Let's fact-check that statement.

20 Aug 2016: TF added a {{GMORC}} notice on the talk page of Jill Stein. In November 2016, he said his interest in the entry was piqued because he had "followed the edits of editors" to the page.

1 Sept 2016. TF's initial reason for filing against me was dismissed at AE as a red herring (my link is to TFD's statement, which is a good explanation of what was going on).

Contrary to what is stated by K & TF, I was topic-banned from Jill Stein for wrestling over a paragraph titled "Media Access" on (2 Sept 2016) and parenthetically for saying that a much-sited WaPo interview was poor at best. The "evidence" TF brought about Weissman's mistaken accusation about 🐝 and TF's own (pretty scandalous IIRC) misrepresentation of the article in Physics Today was not found worthy of discussion. (Obviously nobody − TFD excepted − read the actual article or wanted to talk about the retracted part of Weissman's Salon blog piece.)

2 Sept 2016, TF !voted delete for a spin-off Political Positions of Jill Stein entry I'd created to mirror those existing for the Rep/Dem/Lib candidates (a layer of BLP protection for campaigns).

3 September 2016 : TF comments on that "invisible" AfD (no handy link from mainspace these days, you have to know it exists):

ed. After this, as can be seen in the link, there was one more "keep" vote, then Kingofaces43 cast the last "delete" !vote.

This request is without merit. Almost all of the request completely misrepresents the facts, and it is fundamentally a demonstration of unwillingness or inability to understand SashiRolls' own misconduct that resulted in the sanction in the first place.

19 Nov 2016 in response to TFD and Gandydancer wondering why the Jill Stein article looked like it did, Trypto wrote:

There is a very simple reason why I was drawn to editing this page. I have followed the edits of editors who were parties to the GMO ArbCom case (to my knowledge, they have not edited the Clinton page), and I observed that one such editor made an edit to this page that violated the DS, so I came here and corrected it. That's it.

Notes: The 20 August 2016 edit he presumably thinks violated DS was reverted by Victoria Grayson in the next edit.

Trypto, in fact, just added some juice to something one of the page architects had written on the 6th and some hatnotes that were the source of contention in the cited discussion above.

It is worth noting, concerning changing standards for warning the public/readers that an article is under 1RR, that there is a BIG BIG BIG template on this page warning about 1RR at the time. No such warning exists on the Séralini affair page or the Glyphosate page.

This dispute is indeed ripe for AE, and maybe well-past its spoilage date. I've been in the previous AEs for SashiRolls, and Snooganssnoogans is correct that this is the typical pattern. I agree strongly with what Dennis Brown says below, having actually been in such editing situations. We are at the end of the WP:ROPE.

It boggles my mind that we are back here so quickly after the previous block expired. I agree with all the other editors who say that this is in NOTHERE territory, something that I have been seeing since a long time ago with this user.

From 🎃 Halloween night 👹 through to 💀 Toussaint 👻 2018, Mr. T. expressed the "strongest possible opposition" to my unblock request at AN, writing of me:

This is someone who has zero intention of coming back and being a productive editor. I appreciate the number of admins who have, quite thoughtfully, given the benefit of the doubt, and I was going to defer to you on that, setting aside my personal reservations on the assumption that my personal views might be skewed by past experience. But now, I have to say that you are being played. Indefinite block, no talk page access.

He was also involved in lengthy discussions about me on his talk page.

On 30 March 2019, TF placed a DS notification for GMOs on my page because I had shown interest in the glyphosate entry's shortcomings since mid-January when Roundup 360 was indefinitely banned in France.

01 May 2019: Fast-forward through the recent ANI/fest to the penalty groin-kicks and M. (call me Kolya) Butternut's filing at Arbcom. This led me to receive a ping to Trypto calling me a crackpot:

That new thing at ANI is just trolling. I'm going to try to ignore it, and let others evaluate it, and I recommend that you not reply to it either. Given your wishes, I won't propose the IBAN. If you go to AE, it's up to the admins what kind of ban, if any, they hand out, so you cannot really request a site ban. Being at Wikipedia tends to come with crackpots saying obnoxious things about one, so sometimes it's best to just let it pass. I can assure you that no one in their right mind takes seriously the stuff that SashiRolls said about you. 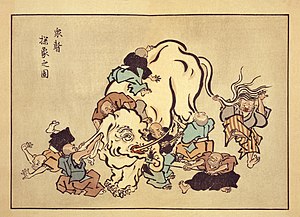 ed. what stuff? that bit about the drama blue ice-cap in the graphs here?

Have I wandered into some sort of wiki-campaign by any chance?

The patterns on the elephant's skin are always very intricate. One notices that Laser brain & Seraphimblade are quite often around...

14 Dec 2015 I see that it was Kingofaces43 who added the redundant {{Round in Circles}} to Talk:Glyphosate.

I had also wondered who originally redirected the Monsanto-formulation Roundup® (herbicide) page to Glyphosate.

The original version of this page was deleted by "Reaper Eternal" on-wiki, and I was perma-banned on 30 October 2019 by "El C" (a relatively recently recycled old skool admin) for linking to it here (in a previous version). Does that mean there's something journalists should explore in the Tryptofish-Kingofaces43-El C trio? Well, I, for one, think there is. ^^ A discussion was started at deletion review (thanks, Wumbolo!), which led to my unblocking.

All Hallow's Eve battleground strategy discussions between KoF & the Fish.

Wumbolo was subsequently blocked for criticizing an admin (in an unrelated matter) and retired.