This wiki needs a jazz page. It will very likely grow. The name of this page is taken from Oakland-based Ishmael Reed's 1972, Mumbo Jumbo, which, has been described as "an ironic reimagining of 1920s Harlem as the focal point in a centuries-old battle between two shadow forces: a group representing European institutional order and Jes Grew, a virus/movement/pleasure-seeking principle originating among black artists."[1] 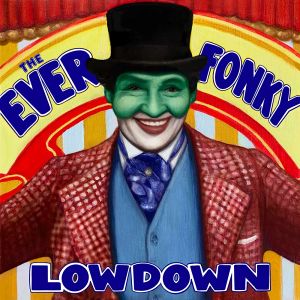 As this issue was in preparation, Maria Schneider's Data Lords release was so widely covered I was able to hear not just the first but also the last song on the double album on France Musique,[2] in addition to the short extracts at her website. For the moment, I'm not going to say much more than that I love the title and that this level of digital inaccessibility is a surprisingly rare thing. I learned while making this page that ECM held out until almost three years ago before "finally" dropping their catalog into the bitstream.[3]

Wagner once said, “Don’t look at the trombones, it only encourages them."[4]

And then the Word said, "Let there be paperclips," and there were trombones.

A well-spent hour at Banzzaï (France Musique) led me to this memorable title,[5] which is apparently the soundtrack to a documentary about the (re)discovery of ancient ruins in Mosquitia.[6]

With unexpected citations and funny deformations throughout—wait! what are you doing to Antônio & Luiz in the trunk, there ?!—this made for a great entry into a unique blend of sounds (bass clarinet, vibes & flute, in particular, with an excellent drummer). (bandcamp)

Arve Henriksen, "Patient Zero", 2017.
from a CD called Towards Language which gets thumbs up from the maskèd many. The bamboo sound of his mouthpiece-less trumpet[7] sent me looking in the time machine for Steve Turre. I found him back in Vienne in 1997 making (very different) sounds with his sanctified shells.

Charles Lloyd & Jason Moran, "Hagar's Lullaby", "Prayer", "Sand Rhythm", NPR Music Tiny Desk Concert, 2016.
The first piece is from Hagar's Song (part V of "Hagar's Suite") (2013). Charles Lloyd apparently isn't only referring to the Biblical character but also to an enslaved forbear (his great-great-grandmother was taken from her parents at 10 and sold upriver at a slave market).[8] I have little common ground for a story like this as my distant forbears were likely more familiar with serfdom than slavery and I don't know Old World family stories. As a result, I remember in the mid-nineties being very perplexed about growing into 21st century "America". First there was "Call me Ishmael," then Mr. Reed, then "Lawd, lawd, wad'nat a fish"? "The Old Wives' Whale" is from that time. For some presumably good reason I did some Bib la study back then, and was encouraged to write a poem rather than an essay to prove I hadn't just been chewing on the corners of The Booktm.

Both the Rolling Stone reporter covering the Newport Jazz festival in 2018[9] and the president of the Blue Note magic department took note of the spellbound crowd.[10] With such star power the solos are short and the textures are deep. Lee Morgan & Joe Henderson's famous piece (§) is the last song on the album. It is cut in half, slowed down and reworked into what Sketches of Spain might have sounded like with a bass clarinet, a sax, and a round piano fused into the brew. It conjures up slitherin' sidewinders getting on very nicely with their sunny day.

Lonnie Smith, "As the World Weeps", Rise Up!, 2012
Lonnie Smith's original studio version finishes with a choir reminiscent of Donald Byrd, A New Perspective, but over the voices, there's a rebellious saxophone.

Mary Halvorson / Bill Frisell – The Maid With The Flaxen Hair: A Tribute to Johnny Smith, 2018.
I'm one of those people who had never listened to Mary Halvorson until someone who shall remain nameless got me looking into prolific women in jazz. I've included the subtitle, so the title doesn't mislead you into thinking this CD is all about Debussy. In fact, it is a tribute to a guitarist who once taught Bill Frisell "old fuddy duddy corny schmaltzy stuff". Frisell has since recanted this view and has dedicated songs and now, along with Mary Halvorson, an album to him. Described as a case study in "the bankruptcy of modern jazz guitar",[13] it's ipso facto worth a listen, or even several. :)
Charles Lloyd & The Marvels, "Vanished Gardens", 2018.
Charles Lloyd (tenor sax), Bill Frisell (guitar), Eric Harland (drums), Greg Leisz (dobro, pedal steel), Reuben Rogers (bass). The album also features Lucinda Williams (vocals) on five of the ten tracks (including "Dust"). "Vanished Gardens shows how the many currents of American music all flow into a single stream",[14] maybe somewhere between Cairo, Memphis and the Atchafalaya.